Since the 2008 market debacle and subsequent recession, there has been a slow and steady increase in economic activity and positive overall market performance. Currently, we sit on low unemployment and an economic environment that is favorable. Retirement savings in accounts such as 401K’s should have shown a healthy return over the last few years. 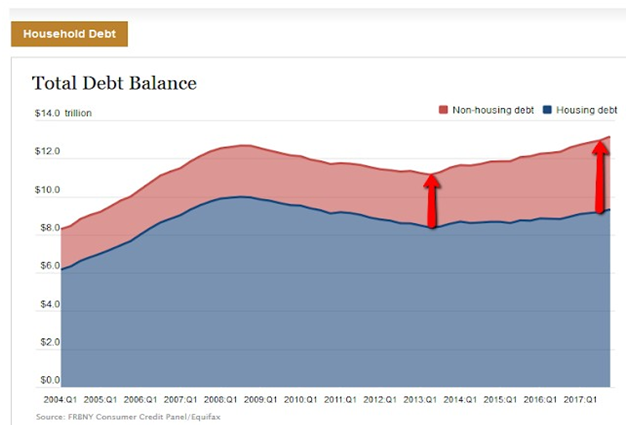 Here’s a quick summary of the report. Total U.S. household debt rose $193 billion in the 4th quarter of 2017, to a new all-time peak of $13.15 trillion. That's 17.9% above the most recent trough in Q2 2013. Broken down by segment, what do you suppose was the largest gain in percentage terms? Credit cards, with a 3.2% increase. In the picture above, the widening gap represented by the red arrows reflects the fact that non-housing debt is rising at a faster pace than housing debt.

Here's what's troubling about that. Below is a picture of the stock market, as represented by the S&P 500 index, over that same period; from the most recent credit trough in Q2 2013 to the end of 2017. 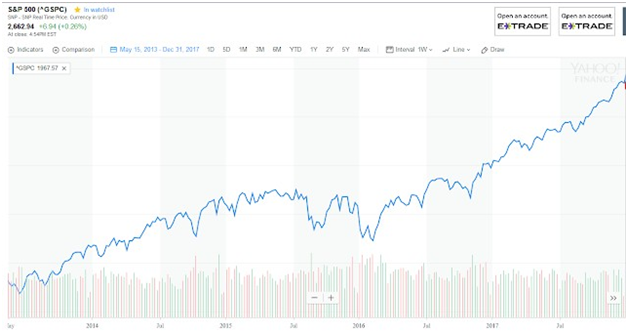 And thus, the title of this article. Over that period, the S&P 500 index rose by 75%; from roughly 1,600 to 2,800. Apparently, however, the rising tide did not lift all boats. One would think that burned by the financial crisis of 2008-2009 and riding a wave of profits from the stock market, U.S. households would have been both eager and able to trim those debt levels. Perhaps some did, but clearly not all. And that is troubling because it means the bulk of those gains have ended up in the hands of a few, while many continue to struggle.

But more than that, we've recently seen the first solid hints of inflation and rising interest rates. In the main, it was this threat that led to early February's violent action in the markets.

Now here’s the possible problem. Lots of debt colliding with rising interest rates. It's a challenge the U.S. government will face. But so, apparently, will many U.S. households.

In times of positive economic activity and rising wages, create a plan to pay down debt. This especially applies to consumer debt. Many sites such as Dave Ramsey have good resources for creating a debt snowball approach. Read it and then start doing it!

Do not create unnecessary new indebtedness. Paying off an auto loan should not be an impetus to go out and buy a new car now that the old one is paid off.

This applies to everyone. If you are retired and have no debt, review this with your children. If you are currently working and have no or manageable debt use this as inspiration to prepare yourself accordingly when the next recession comes. Because believe me, it will.

There are many unknowns concerning finances. What will the markets do? How secure is my employment? But there is a “known” that we can manage. DEBT. Manage it wisely.